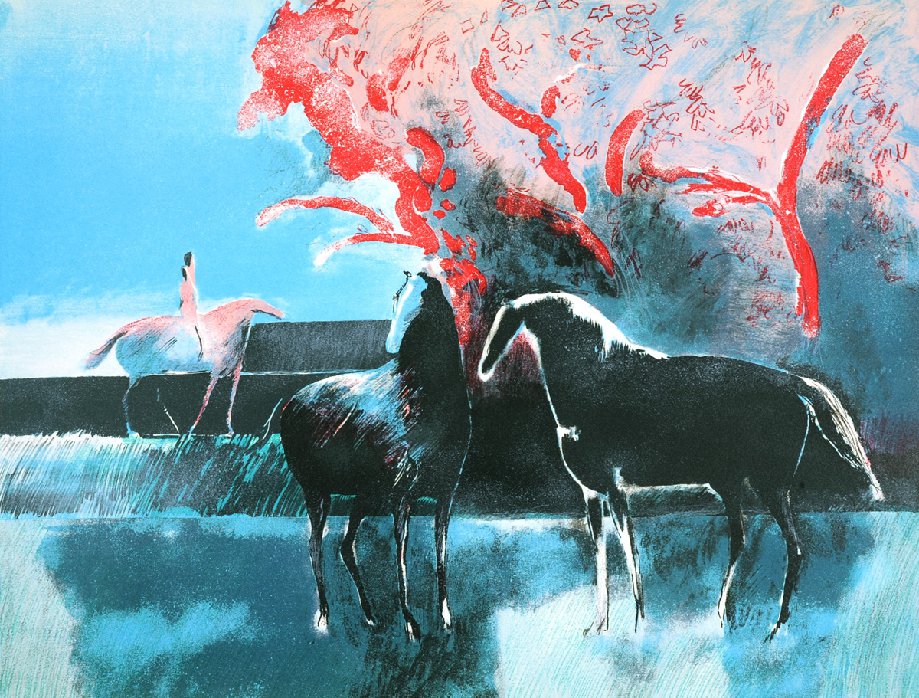 Paul Guiramand was born in 1926, in the town of Saint-Quentin, France. In the early thirties he moved to Paris and became a witness to the violence of war torn France. Two years later he began to study design at the Ville de Paris.

- Under the guidance of Professor Maurice Brianchon, Guiramand continued his studies at the L'Ecole des Beaux- Arts School in 1943. Brianchon was most influential to Guiramand in his career, as were Picasso and Matisse, both were breaking artistic barriers in 1944 during the Liberation of Paris.

During 1948 Guiramand supported himself with a night shift position at the National Weather Center. During this time he afforded himself the luxury to travel to Spain and Italy where in Florence and Arrezo he was introduced to and subsequently inspired by the works of Masaccio and Piero della Francesca.

- Guiramand was also a set designer, most noted for his designs for the theater production by Federico Garcia Lorca at the Kantsallisteatteris in Helsinki that ran during the 1950's.

In 1952 Guiramand served in the Military Service. His Professional presence was first noted when he was Awarded the "Prix de Rome" in 1953. His first exhibition was premiered at Marlborough Fine Art, in London. At this time Guiramand was living at the Villa Medicis, sharing the residence with honored artists such as Tilson, Francis Bacon and Corpora. Many of the famous Italian Cinema artists of that era were also in residence.

In 1954 he began a series of lithographs at the Atelier of Fernand Mourlot under the council of Charles Sorlier. Mourlot's Atelier was a popular gathering place for such noted artists of the epoch: Miro, Chagall, Estčve, Rebeyrolle, Manessier, Cueco, and Cottavoz. Many of these artists became Guiramand's life long friends.

In 1962 he saw the birth of his son Gilles, and this was the time when Rauschenberg, Jim Dine, Jasper Johns and Wesselman left the spark of influence on Guiramand.