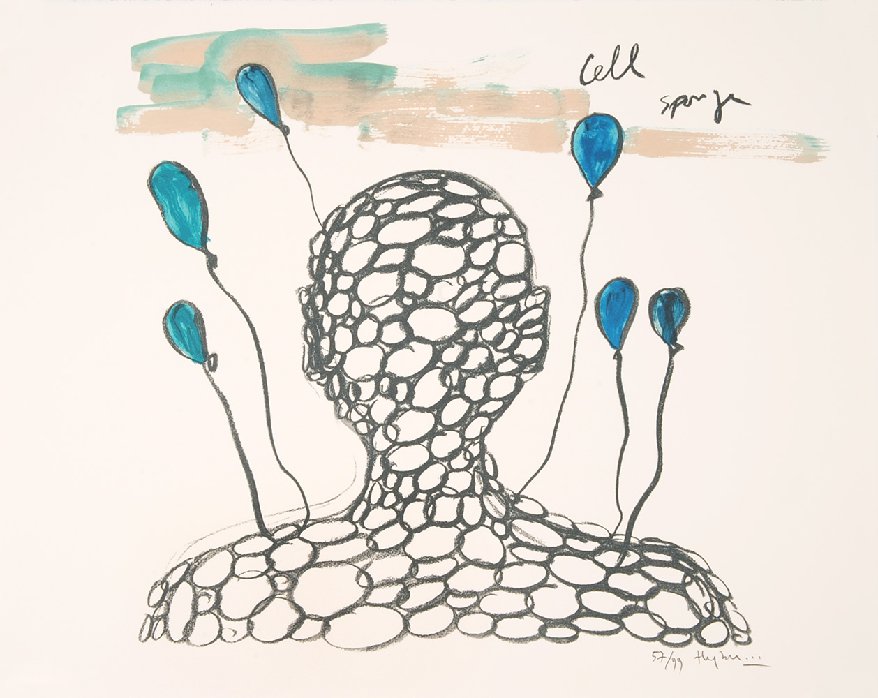 FABRICE HYBERT, Internationally renowned artist, he works in many diverse ways - accumulation, proliferation, hybridization - sliding between painting, sculpture, installation and video. In 1994, he created UR (Unlimited Responsibility), an organisation with the goal of building links between artists and enterprises.

Hybert has suggested that his work explores 'the enormous reservoir of the possible' (Eyestorm 2007) via a deconstruction of language and communication. To this end he deploys a very wide range of media for the purpose of expanding the range of his creative practice, deconstructing language in order to present the viewer with puzzles. He abjures the coherent, instantly understandable, text and the consistent oeuvre in favour of a proliferation that reflects the fundamentally nonlinear character of cognition. This is art in the tradition of the Surrealist object and stream of consciousness. It is more akin to James Joyce's Finnegans Wake than it is to classic narrative, it is Dionysian rather than Apollonian.

- On the other hand some of his projects look like exercises in visual language, his square football is not especially bewildering. It is quite simply a functional object that is turned into an ideal form (the cube). His idealised, cubed football maps onto the horror of function that characterises post-Duchampian fine art that rose into dominance in the international art world in the 1960s. Fabrice ironically refers to such functionless objects as Prototypes d'objects en fonctionnement (prototypes of working objects), or POF. Another instance of connecting the previously unconnected (cf. Simon Starling) is Hybert's Swing (POF No 3), 1990. This is a playground swing with the addition of 'two phallic protuberances on the seat, one hard, one soft' (Eyestorm 2007). The pedophilic connotations appear to escape the artist or the art world for that matter.

Another work Roof-Ceiling (POF No 10), 1995, consists of a mechanical device which vacuums up the rubbish in a room and deposits it in a transparent ceiling overhead; installed in a hairdressing salon, it allows the viewer's newly sheared locks to become part of the architecture. '(Eyestorm 2007). This work is not only a demonstration of creative cognition it is also a valuable excursion of fine art outside the museum and into everyday life. Hybert is one of the artists that Nicolas Bourriaud included in his account of so-called relational art which is to say art that engages with people and everyday life (Bourriaud 2002).