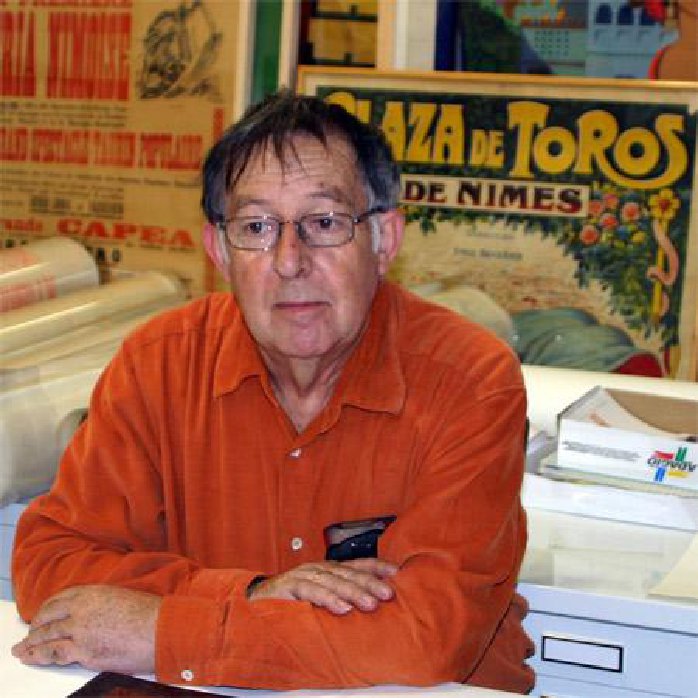 Born in NÓmes, he grew up in Aubais, a French village with a strong bull tradition. In 1955, he joined the …cole des Beaux-Arts (Fine Arts School) in Montpellier, where he met Andrť-Pierre Arnal, Vincent BioulŤs, Daniel Dezeuze, Toni Grand, FranÁois Rouan, and Henriette Pous, whom he married in 1962.

- After doing his military service in Algeria from 1958 to 1961, he joined the …cole Nationale Supťrieure des Beaux-Arts (the National Fine Arts School) of Paris, where he met fellow students JoŽl Kermarrec, Pierre Buraglio, and Michel Parmentier. He discovered American art in Paris, notably the works of Kenneth Noland, Morris Louis, Sam Francis, and Mark Rothko. As soon as 1963, he was attracted to abstraction. He was appointed as a teacher in the …cole des Arts Dťcoratifs (Decorative Arts School) of Nice in 1964 and decided to create a new formal language questioning the conventions of classical painting. He then started working systematically with one shape affixed on canvas without stretchers. His first personal exhibition took place at Nice's Galerie A in 1966. He also participated in several collective exhibitions that year.

In 1967, he was appointed as a teacher in the …cole des Beaux-Arts (School of Fine Arts) in Limoges, where he met Raoul Hausmann. In 1968, in Paris, Viallat had his first personal exhibition at the gallery led by Jean Fournier - who remained his gallerist for nearly thirty years. He then participated in an exhibition that arguably originated the "Support/Surfaces" movement at the ARC, in the Modern Art Museum of Paris. His works were in most of the exhibitions of the movement from 1969 to 1971. Although he initiated this group and influenced it aesthetically through his pictorial works, he resigned on May 3, 1971 as he disagreed with the political and theoretical orientations imposed by Louis Cane and Marc Devade. In 1972, during his first trip to the United States, he discovered Jackson Pollock's paintings and the art of Native Americans. The same year, he participated in the "Amsterdam-DŁsseldorf-Paris" exhibition at the Solomon R. Guggenheim Museum of New York, and the "Douze Ans d'Art Contemporain en France" exhibition (Twelve Years of Contemporary Art in France) at the Grand Palais in Paris.

- In 1973, he was appointed as an instructor at the …cole des Beaux-Arts (the Fine Arts School) of Luminy (located at avenue de Luminy, in Marseille), and moved to Marseille. In 1974, the first ever Viallat exhibition in a museum was organised in Saint-…tienne's Musťe d'Art et d'Industrie (Museum of Art and Industry). In 1979, Claude Viallat became director of the …cole des Beaux-Arts (Fine Arts School) of NÓmes. He started collecting objects related to bulls. His collection was the starting point of the Musťe des Cultures Taurines (Museum of Bull Tradition) of NÓmes, opened in 1986.

The Centre National d'Art et de Culture George Pompidou (the National Modern Art Museum of Paris) hosted a Viallat retrospective in 1982. He represented France at the Venice Biennial in 1988. The same year, he made the stained-glass windows of the Gothic Choir in Nevers Cathedral. In 1991, he became a teacher at the …cole Nationale Supťrieure des Beaux-Arts (National Fine Arts School) of Paris and participated in the Supports/Surfaces historical and retrospective exhibition at the Musťe d'Art Moderne (Modern Art Museum) of Saint-…tienne. In 2006, he was awarded with the Fine Arts Academy's Fondation Simone et Cino del Duca (Simone and Cino Del Duca Foundation) prize for painting .

- In France he is represented by Bernard Ceysson, galerie Jean Fournier in Paris since 1968, and wiki:fr:Daniel Templon (from 1998), in Montpellier galerie HťlŤne Trintignan. Claude Viallat is also reprťsented internationally in Tokyo by Gallery Itsutsuji and in New-York by Leo Castelli.